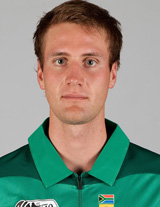 
Theunis Booysen de Bruyn (born 08-Oct-1992; Pretoria, Gauteng) is a right-handed batsman and an occasional right-arm medium-fast bowler, who plays international cricket for South Africa. He made his International debut in T20I against Sri Lanka on 20 January 2017.