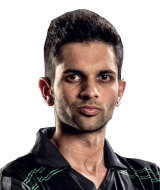 
Keshav Athmanand Maharaj (born 07-Feb-1990; Durban) is a right-handed batsman and slow left-arm orthodox bowler, who plays international cricket for South Africa. He made his International debut in ODI match against England on 27 May 2016 at the Rose Bowl.

Netherlands knocked out South Africa of T20 WC [+]
Netherlands cause a massive upset to give Pakistan/Bangladesh a chance to join India in the semifinal.

Shadab all-round show keeps Pakistan hopes alive [+]
Pakistan boost their slim hopes of progressing in the T20 World Cup with a brilliantly frenetic fightback against South Africa at the Sydney.

Ngidi, Miller, Markram drive South Africa to crucial win [+]
South Africa restricted India to 133/5 and chased it down in the final over.