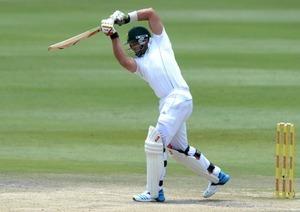 
29-Dec-13: Jacques Kallis is only the fourth South African batsman after Pieter van der Bijl, Barry Richards and Lee Irvine to hit a century in his farewell Test.

02-Jan-2013: Jacques Kallis passed the career milestone in his 159th Test and on a record-filled day in Cape Town against New Zealand.

Jacques Kallis is an all-rounder, he is a formidable right-handed batsman and fast-medium swingbowler. He is the only cricketer in the history of the game to hold more than 10,000 runs and 250 wickets in one day and Test match cricket

India Fights for Save Durban Test

Netherlands knocked out South Africa of T20 WC [+]
Netherlands cause a massive upset to give Pakistan/Bangladesh a chance to join India in the semifinal.

Shadab all-round show keeps Pakistan hopes alive [+]
Pakistan boost their slim hopes of progressing in the T20 World Cup with a brilliantly frenetic fightback against South Africa at the Sydney.

Ngidi, Miller, Markram drive South Africa to crucial win [+]
South Africa restricted India to 133/5 and chased it down in the final over.