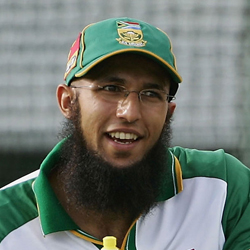 
Hashim Muhammad Amla (born 31-Mar-1983; Durban, Natal Province) is a right-handed batsman and an occasional right-arm offbreak bowler, who plays international cricket for South Africa. He made his International debut in Test against India on 28 November 2004 at Eden Gardens, Kolkata.

Hashim Amla retires from all forms of cricket