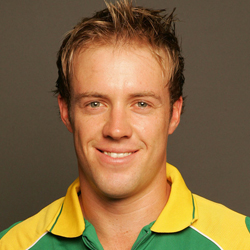 
Abraham Benjamin de Villiers (born 17-Feb-1984; Warmbad, Transvaal Province) is a right-handed batsman and an occasionally wicket keeper, who plays international cricket for South Africa. He made his International debut in Test against England on 17 December 2004 at St. George's Park.

On 23 May 2018, he socked everyone via a sudden announcement retired from international cricket.

Maxwell, de Villiers fire make it three out of three for RCB

Proteas stand tall to grind out third-Test draw [+]
A defiant South Africa only allowed the Aussies to take six final-day wickets as they showed considerable fight on day five at the SCG.